The Labor Film Series is made possible by the commitment and generosity of many unions and friends of labor.

The Rochester Labor Council and George Eastman House have shown over 250 labor-themed movies. The films represent several genres and encompass a wide range of issues — from the conditions of work and the workplace to organizing struggles, from discrimination and redundancy to globalization and immigration, from blue and white to pink collars.

Click to see this year’s film schedule and program.

Since its inception, the Labor Film Series has become part of Rochester’s cultural calendar. Its expanding audience includes many who attend regularly and contact us to suggest films and to inquire about the program. To date nearly 28,000 movie lovers have come to the Dryden Theatre to see our labor-themed films.

Over the years, we have also been fortunate to bring many filmmakers and others to the Dryden to present and discuss their work or to introduce films:

In keeping with Dryden Theatre tradition all Labor Series films have been preceded by introductions which supply background on issues raised in the films, offer insight into the films' production or the filmmakers' intent, or help viewers to understand films during or after the screenings.

Many of these introductions have been transcribed and published at LaborFilms.org. Also at this website is an alphabetical listing of the films screened in all our Labor Film Series.

This website — — lists all the films in each year of the labor film series (see right sidebar), complete with descriptive blurbs. The website also links to Struggle in Smugtown, our video documentary on Rochester labor history, screened at the Dryden in 2002.

The network is coordinated by Chris Garlock of the Metro DC Labor Council, (formerly with our Labor Council). The network's annual conference brings together labor film organizers to share ideas and experiences. GLFF also maintains a database of nearly 2,000 labor films and videos.(laborfilms.com).

In addition to strengthening established labor film programs and encouraging new ones, GLFF may eventually work with filmmakers who want to reach our audiences. Meanwhile many GLFF programs coordinated screenings this May, including our showing of Pete Seeger:The Power of Song.

The Rochester Labor Film Series has received both encouragement and generous support from the local labor community:

from the Rochester Labor Council;
from its many affiliated unions;
from the Pettengill Labor Education Fund.

The series has also been sponsored by many individuals as well as by community groups such as Metro Justice, ROCLA, Finger Lakes Occupational Health Services, and the National Income Life Insurance Company. See a complete list of this year's sponsors.

The series has been sustained over these 25 years by the interest shown in labor films by the thousands of people who attend them: members of unions and community groups; Eastman House members; students; film lovers who appreciate the shared experience of seeing images projected on a large screen before a live audience.

See you at the Dryden. 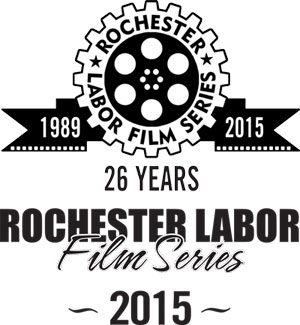